Considering a real estate purchase in the next year or so? It looks like the Fed’s promise to start increasing interest rates is coming to fruition.

“The Fed on Wednesday raised its benchmark short-term rate by a quarter percentage point to a range of 0.75% to 1% and stuck to its forecast of two more such increases this year and three in 2018. Some economists had expected Fed policymakers to modestly step up the pace.”

It seems NOW is the time to buy and let’s look at why. In the example in my attached picture I show a purchase with a loan of $300,000 over 30 years. The rate in example one is 5% and in example two is 6%. Waiting that extra year or so to buy might end up costing you $189 a month or $67,748 over the course of the entire loan. This is an amount that goes to nothing but the bank. You don’t get a nicer house for it, you don’t get a complimentary box of chocolates! 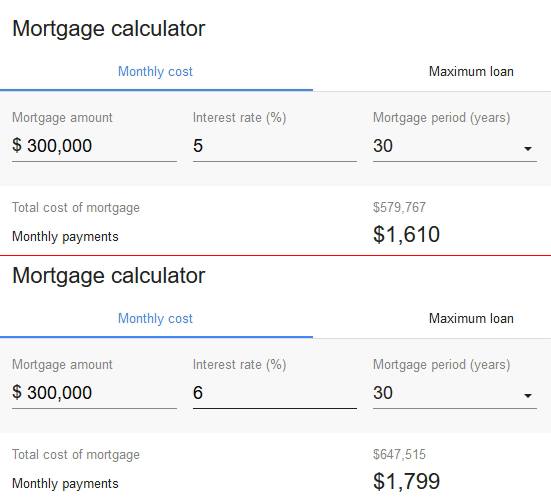 If you are investing in a property to rent out, then this number can be the difference between a profitable deal and one that isn’t.  So, in the words of every bad late night infomercial… Act now, while supplies last!